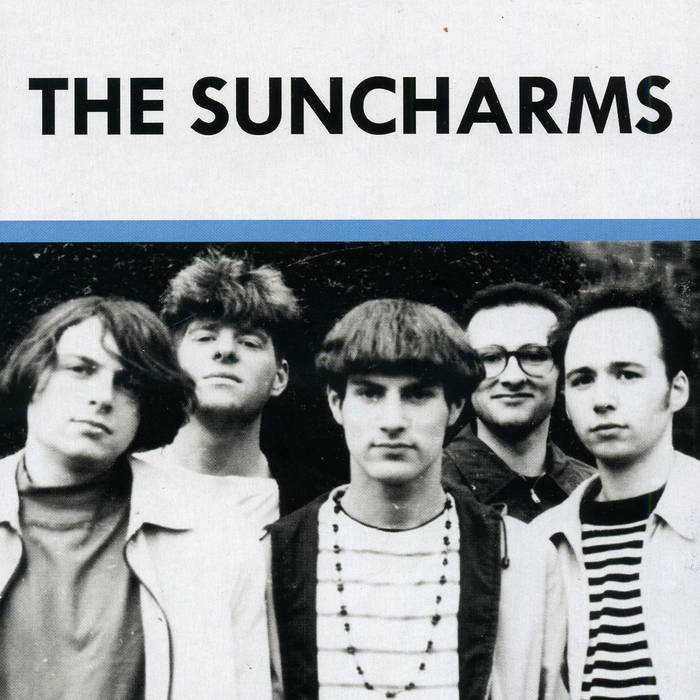 Dave Echo It's so very!
I've been waiting to pass out to this in headphones for ever! Finally it's happening right n..... Favorite track: Spaceship.

Music Won't Save You

Retrospective album compiling all our original recordings from 1990/1991.
14 tracks including the two 12" EPs on Wilde Club Records as well as compilation tracks and previously unreleased songs.

Review from Bliss Aquamarine:-
THE SUNCHARMS s/t CD (Cloudberry)
Out now on Cloudberry Records' Cloudberry Cake Kitchen series of reissued/archival recordings is this 14-song compilation from early 1990s Sheffield band The Suncharms. All the songs from their two EPs on Wilde Club Records, which I bought back in the 90s, are here along with six demo tracks which are new to me. The album is nicely packaged with sleeve notes on the history of the band, and memorabilia pictures including a fanzine that featured them alongside loads of other familiar names from the DIY indiepop scene of the time, such as Librarian, The Marigolds, The Bedflowers, The Vicarage Garden, etc, and a music press cutting in which The Suncharms' self-titled EP was reviewed alongside The Sea Urchins' Please Don't Cry, the first record I ever heard from The Sea Urchins, who were soon to become my very favourite band. This is all very nostalgic and meaningful stuff for me, dating as it does from the exact time that I was discovering the world of indiepop.
The EP tracks are characterised by a juxtaposition of gentle melodies and hushed vocals with relentlessly noisy guitars, producing an overall sound that bridges the gap between the noisier end of indiepop and shoegaze. Occasionally I hear aspects of The Suncharms' sound that may even appeal to the psychedelic crowd, such as how Reflections begins and ends with some beautifully atmospheric moments with an almost psych-folk quality, and Time Will Tell includes some drawn-out, fuzzy guitar work that is unusually rockish for a band who were, and continue to be, embraced by the indiepop scene, a musical community with a general reputation for looking askance at such things as guitar solos. The Suncharms weren't interested in playing by the rules of any specific scene, they just played the music they enjoyed, a 'be yourself' attitude that is deserving of applause.
On the whole however, The Suncharms' music isn't particularly psychedelic or rock, much less folk. One I See is a fine slice of buzzsaw pop that would have fitted right in on the Subway label, combined with lashings of swirling wah-wah. There are some really great noisepop songs here like Tranquil Day and Walk Away, whilst She Feels is a full-on shoegaze track that should quite frankly have made The Suncharms just as popular as all the big names from that scene, and Spaceship has a good balance of fuzzy dreampop haze and powerpop oomph. Most of the demos show a different side to The Suncharms' sound, tending towards being janglier, less shoegazey, and falling more squarely into the indiepop category. Sort it Out is fantastic late 80s/early 90s jangly indiepop, the kind that always brings a smile to my face. Verge of Tears is a catchy indiepop song about a sensitive and emotional man, set to a pairing of jangle and crunchy, fuzzy noise. Into the Sun is brilliant tuneful noisepop in the best late 80s/early 90s style. On Reflection is introspective and delicate indiepop interspersed with a wall of swirling noise that hints at the shoegaze sound that would be developed further on their vinyl EPs.
Whether you're into jangly or noisy indiepop or shoegaze, this album is an absolute must. It's also great to know that The Suncharms have reformed and are currently writing and rehearsing new material. Let's hope there will be more new releases from them soon! In the meantime, the compilation album can be obtained from www.cloudberryrecords.com. If you're in the UK, Vinyl Exchange has a limited number of copies in stock.

The Suncharms are a Sheffield based indie/shoegaze band originally active between 1989-1993.
After releasing a retrospective CD compilation on Cloudberry Records the band reunited and released a 7" single on Slumberland Records in 2018 which can be purchased here:
slumberlandrecs.bandcamp.com/album/red-dust ... more

Track Name: Sparkle
When the sun shines down
I wanna be with you
I wanna hold and kiss you
And experience magical things

Let's find a timeless place where time will never part us

Chorus:-Sometimes I feel so vulnerable like I'm falling and drifting away

(repeat chorus)
Track Name: Time Will Tell
One day our looks will fade away
The things we know will never stay
The people we love - old and grey

Time will heal time will scar - time the ruler of us all
Track Name: One I See
Should love be all that I long for?
What matters?
Will I be happy?
Will everything fall into place?
Will I be hurt, rejected again?
Will I find love?

Should love be all that I long for?
What matters?
Will I be happy?
Will everything fall into place?
Will I be hurt, rejected again will I find love?

The golden rays stream through my window and I wonder if this will be my day
My day...my day

It's a tranquil day and it feels like a dream making pictures with the clouds.
Track Name: Wash Away
Your life is like a spiral you search for something deeper
Your eyes are sad your skin's so pale

Don't let dreams fade away
What can I say to help you float away? - I can't sleep at night

Wash away , wash away

Your life will wash away ....( repeat to fade )
Track Name: She Feels
She's on the shore
Dreaming of a silver plane
To take her far away

We can be ourselves when we are together
Not acting with others
We can be how we want to be
Track Name: Verge Of Tears
He has friends but feels alone
No one really understands how sad he is
The world seems so angry and he's sensitive
He escapes in daydreams and walks in the rain

He's always on the verge of tears
Of tears , of tears

He's always on the verge of tears
Of tears, of tears ,of tears ( x2 )
Track Name: Magic Carpet (demo)
One of these days I'll find a girl
Pack a bag to India
I'll tell no-one where I'm going
Let the breeze take us away

I don't know - maybe it's better to experience things when there are two of you - maybe on a magic carpet ride?
So let's go!

Step into the sun
It sure would be fun ( repeat )

Bandcamp Daily  your guide to the world of Bandcamp